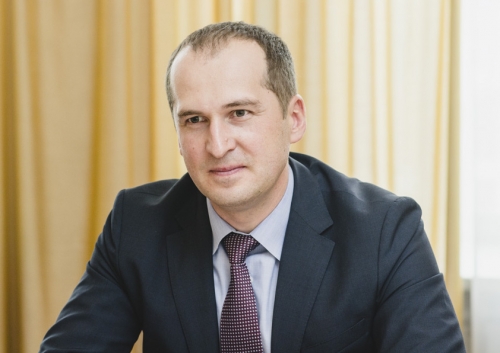 In 1998 graduated from National University of “Kyiv-Mohyla Academy” (bachelor in economics). In 1999 gained a “finance specialist” level at International privatization center (International business school). In 2000 got masters degree of “International management” at Ukrainian Academy of foreign trade.

In 2001-2002 studied at Nyenrode Business School, Netherlands, where received an MBA level (Masters of Business Administration)

Got scientific level of “Professor of economics” (in 2010), thesis “Meat and meat products import regulation in case of Ukrainian euro integration”

In 2001 a management consultant at ABN AMRO, Amsterdam, Netherlands

In 2004-2006 CEO of Rise Group (Ukraine), responsible for general, strategic and investment management of the Group in Ukraine, Russia and Moldova. Implemented efficient budget and control systems.

In 2007-2009 Chief Executive Officer of Foxtrot, responsible for general and investment management in Ukraine and Moldova within 15000 employees.

From 2009 Member of Advisory Board  of National University of Kyiv-Mohyla Academy, member of initiative and coordination group “First professional reformation government”

From 2013 till becoming a head of Agricultural Ministry was a  Member of Supervisory Board at “European milk technologies”, consulted Agroprogress Holding Ltd and Forum Capital about investments into agricultural sector.

From 2014 till 2016 held the position of Minister of Agrarian Policy and Food of Ukraine.

From 2015 Member of the Supervisory Board of NULES of Ukraine.

From 2016 Director of Program for Agro-Industry Development, Ukrainian Institute for the Future.

From 2017 Chairman of the Ukrainian-Dutch Business Council.